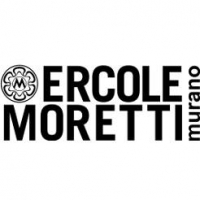 Ercole Moretti & Flli. was established in 1911 by the three Moretti brothers, Ercole, Norberto and Iginio, for the production of two of the most traditional glass beads, the classical “Chevron”, and the “Millefiori” mosaic. The company has never interrupted its activity that continues still today under the management of the sons and grandchildren of the three original founders. Obviously, along the years, the range of products has been greatly expanded, and “Chevron”, and “Millefiori” are now produced alongside a host of other Venetian beads, such as “Africa” mosaic beads, “Sommerso”, “Fiorato”, adventurine glass beads, decorated with gold and silver leaf, semi-precious stone imitations, and many more.

Starting from the ’40s all the way to the ’60s, the company also produced dipped beads imitating natural pearls. One of the favourite tecniques has always been murrine working, leading in the early 70s to the production of medaillons that enjoyed an immediate success due to the originality of the idea and the perfection of the workmanship. They were later followed by small plates and bowls, refined objects reviving the complex and fascinating technique of ancient Roman murrine glass.